What is TECK Cable?

Question:  What is TECK Cable? 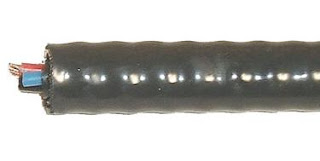 Answer:  It is a flexible armored cable.  It utilizes a design of flexible armor
along with two layers of PVC jacketing.  It was originally used in mining
but has since taken on a wide range of different electrical applications.

At first glance, splicing a TECK cable might seem complicated; but it really isn't.
That is, as long as you've got a Raychem TECK splice kit handy.  The TECK kit
utilizes multiple different Raychem shrink sleeves (WCSM and CRSM) in order
to recreate the same strength, thickness and electrical properties as the original cable had.
TECK splices can be used on cable ranging from 1000 volts to 15kV.

Posted by SteveSimpson at 8:00 AM